Discover the best broadband provider for your postcode

Selecting the best broadband may never have been more important than it is now. Working from home has exposed providers like never before and with 25% of the UK believing they have unreliable broadband and 38% losing connection during an important video call, now may be the time to make the switch.

But where do you begin when making an informed decision? We spoke to over 7,500 broadband customers across the UK to reveal the best providers.

Looking into speed, reliability, value for money, online service, charges and even the set-up process, we have brought the customers reviews to you. And that is not all. Did you know your location could have an impact on the reliability and speed of your broadband? Below you will also find information for easy comparison based on where you live.

So, let’s dive deeper into what customers of the UK’s biggest providers think, to ensure you’re getting the most bang for your buck.

We recognise that reliability and speed are not the only factors customers will think about when purchasing broadband. You may also want to consider their customer service, charges, billing, online services, value for money and set up process.

Ranking from best to worst overall customer experience, you can compare the UK’s top broadband provider based on what is most important to you.

Coming out on top, KCOM (servicing customers in East Riding of Yorkshire) lead the UK providers with 58.12% of their customers satisfied with their overall broadband experience. Although their set up process scores lower in comparison to others, 64.41% of customers are happy with the reliability. This the higher than any other UK provider.

In close second is Shell Broadband which has 57.80% of their customers happy with the overall product. Their value for money and customer service are ranked higher than KCOM with over 60% of customers giving a big thumbs up.

Again, just missing out on the top spot is Hyperoptic who have made 56.59% of their customers happy and if you are looking for speed, look no further. Beating all providers to the top, Hyperoptic has 66.95% of customers testifying to their lightning fast broadband.

In contrast, at the bottom of our list is Virgin who have approximately 73% of their customers claiming they are not happy with the overall experience. Although they score averagely across the board, their charges and value for money have let them down, scoring less than 21%.

Second to last is the Post Office which scores lowest for it's reliability and speed with less than 34% of their customers satisfied. In comparison, the Post Office’s set-up process and billing scored highly with customers showing an average of 61% satisfaction. 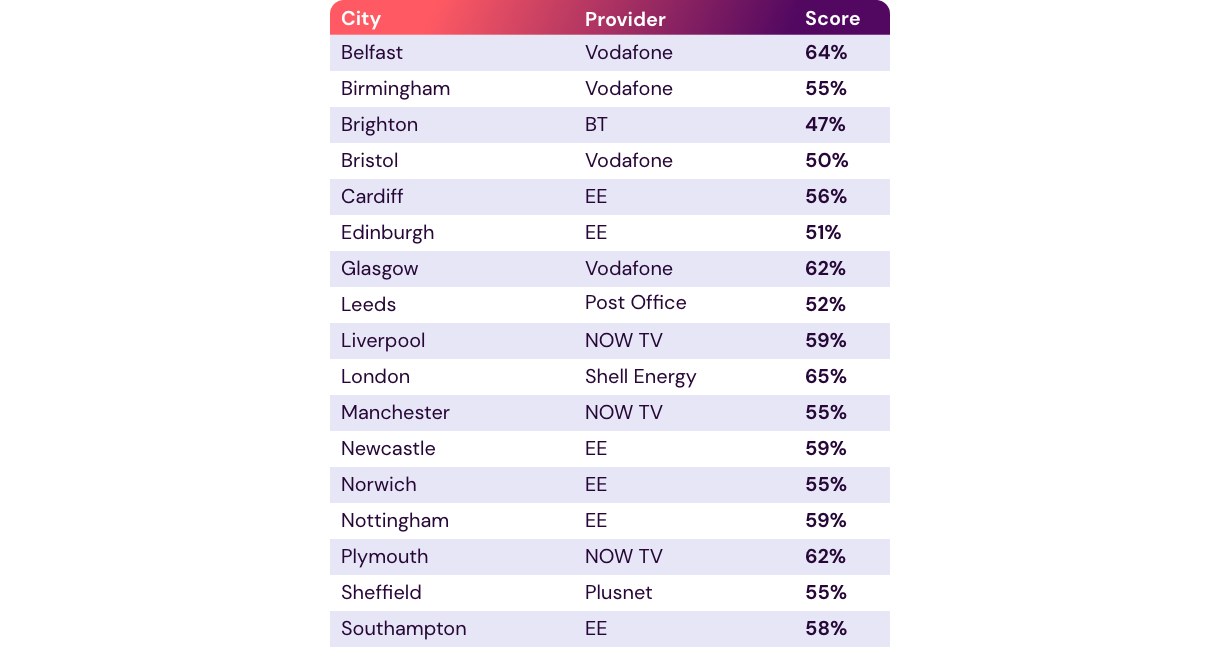 Combining all factors together to find the average percentage of customer satisfaction, according to our survey, EE could be the most consistent choice when it comes to reliability and speed. Demonstrating popularity in 6 UK cities including Cardiff, Edinburgh and Newcastle, EE looks to be a Northern favourite. Similarly, Vodafone is not far behind by being acknowledged in Belfast, Birmingham, Bristol and Glasgow. An average 57% of customers find Vodafone to be the best with reliability and speed.

Best provider for reliability by city 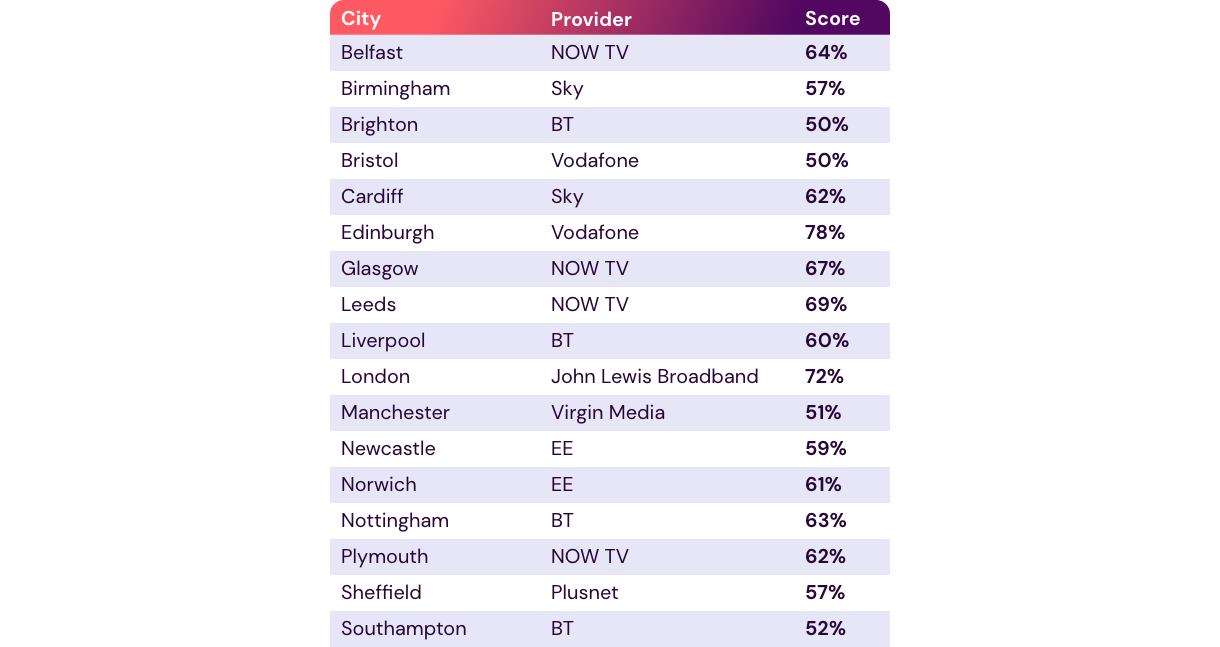 Across the board, customers in cities appear to be receiving great reliability with their broadband. Now Broadband is proving a popular choice in cites including Belfast, Glasgow, Leeds and Plymouth. In the capital however, London customer have named John Lewis Broadband as their most reliable broadband, which boasts a huge 72% rating.

Best provider for speed by city 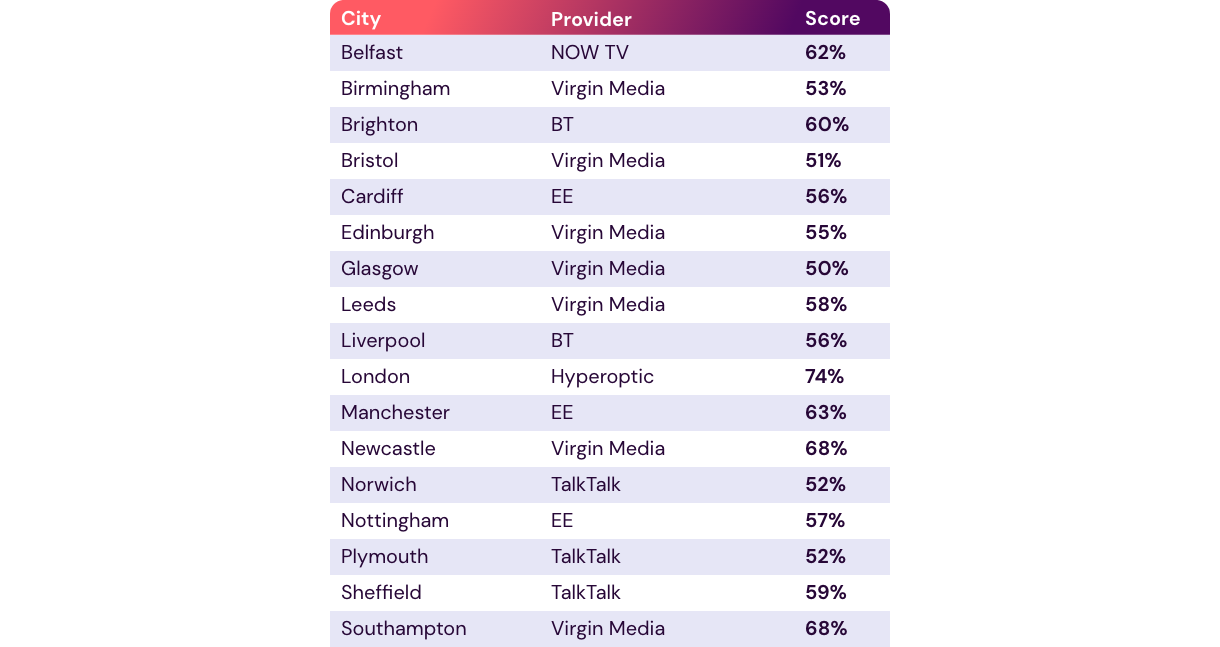 Virgin is shining through once again with their consistent speed rating. Customers across seven cities including Newcastle, Leeds, Glasgow and Birmingham rated Virgin the highest for its speedy service. EE too is a big contender within the UK cities of Cardiff, Manchester and Nottingham, scoring an average of 62%.

Best provider for your budget

Whatever your budget, there is a provider for you. If you’re looking to keep your expenses to less than £25 per month, head to Hypertonic, Zen Internet or Supanet who score highest amongst customers.

For the customers with a little extra cash to splash, Gigaclear, Toople or Pop Telecom will be the providers to look out for with their deals costing £40+.

No matter what you use your broadband for, slow download speed is everyone’s worst nightmare. In fact, 75% of customers with Gigaclear, John Lewis, Supanet and Pop Telecom reported that their broadband speeds are often much slower than advertised.

But who should you go for depending on your required speed? For customers who require a download speed of 100mbs, Vodafone might be the provider for you. EE and Plusnet both also scored highly when it came to quick download speeds.

Are you sharing your broadband with your partner and children a lot more these days? Maybe you’re even sharing it with a group of friends. We guessed you would like to know which broadband would be best for bigger households since 28% of men confessed to turning the WI-FI off to annoy another member of the household. Scoring over 64% for customer satisfaction, SSE, Zen Internet and Origin Broadband are the providers to consider when it comes to juggling multiple devices.

Chances are if your internet goes down, one of the first things you’ll reach for is your phone, or more specifically Twitter. Whether it’s to complain about poor customer service, or to see if other customers are suffering with a broadband outage, Twitter often reveals the real issues customers are experiencing with their current broadband provider.

Referring to social sentiment data, we analysed over 300,000 tweets and mentions to determine which providers were receiving the most love and which were the talk of Twitter for all the wrong reasons.

In contrast, Talk Talk received 12,000 tweets, 55% of which have a negative sentiment. And Virgin find themselves bottom of the charts again with 50% of their 96,000 tweets a little frosty.

Looking to change provider? Compare broadband deals to find the best broadband provider for your needs.