The best cities to become an influencer 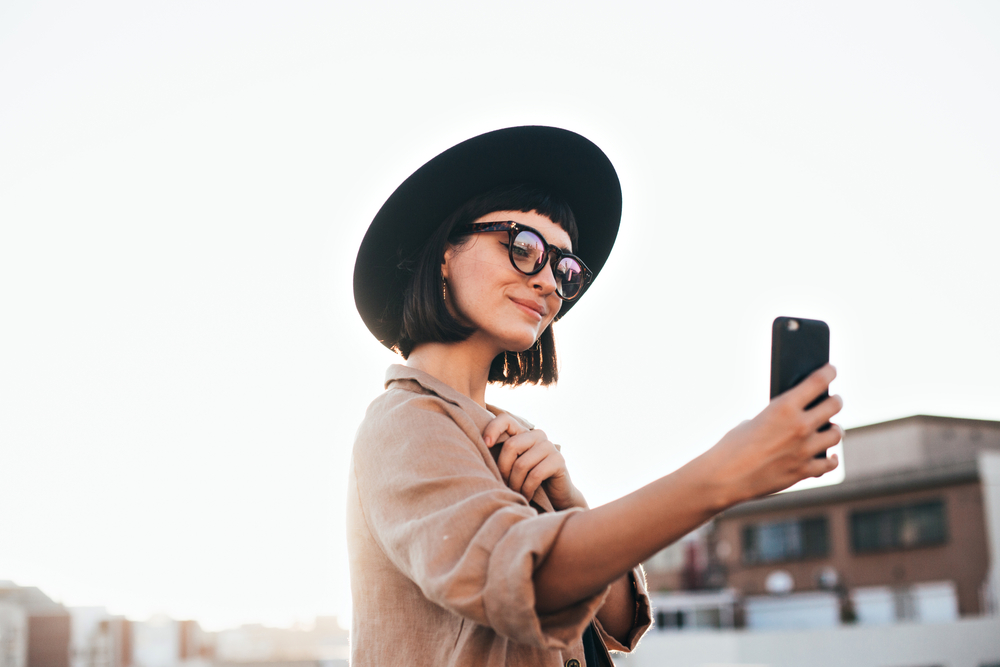 With the number of active Instagram users growing year on year, more and more content creators are looking to pursue a career as an influencer and reap the rewards. In fact, many are even willing to take the leap and relocate in order to do so.

This trend inspired BroadbandDeals.com to find out which UK, European, and Australian cities boast the best opportunities for influencers by creating our very own index, considering everything from the number of landmarks to Wi-Fi hotspots and the number of influencers in each city.

The best cities to be an influencer in the UK

In a bid to discover which UK cities are the best for influencers, we analysed the nation’s major cities using an index point scoring system to rank and reveal the most popular cities for content creators. We have decided to exclude London from our UK analysis as we have defined it as a European capital city. 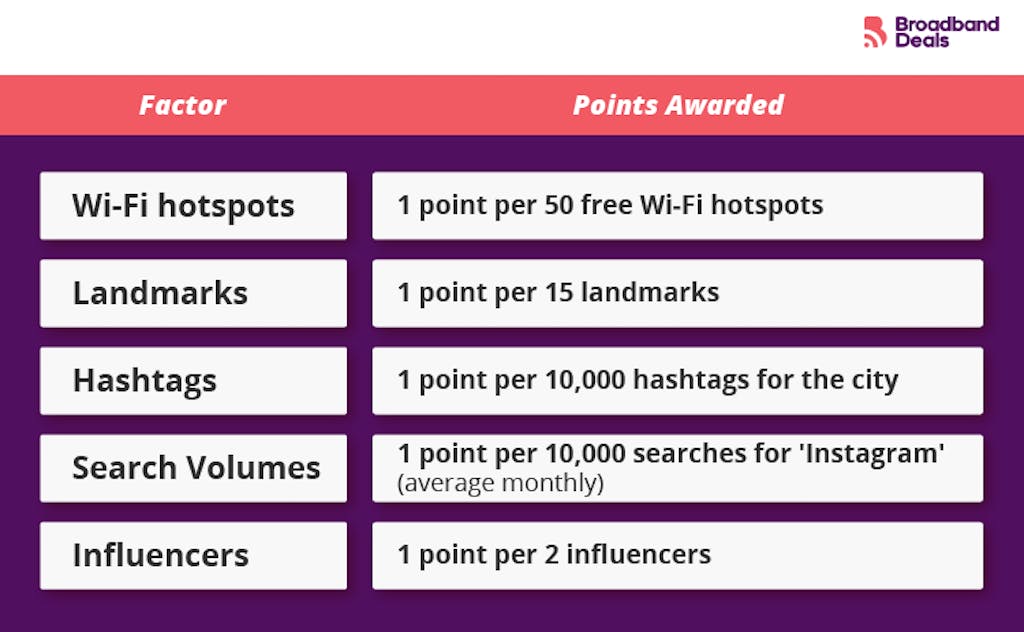 Which cities are the best place to be an influencer in the UK? 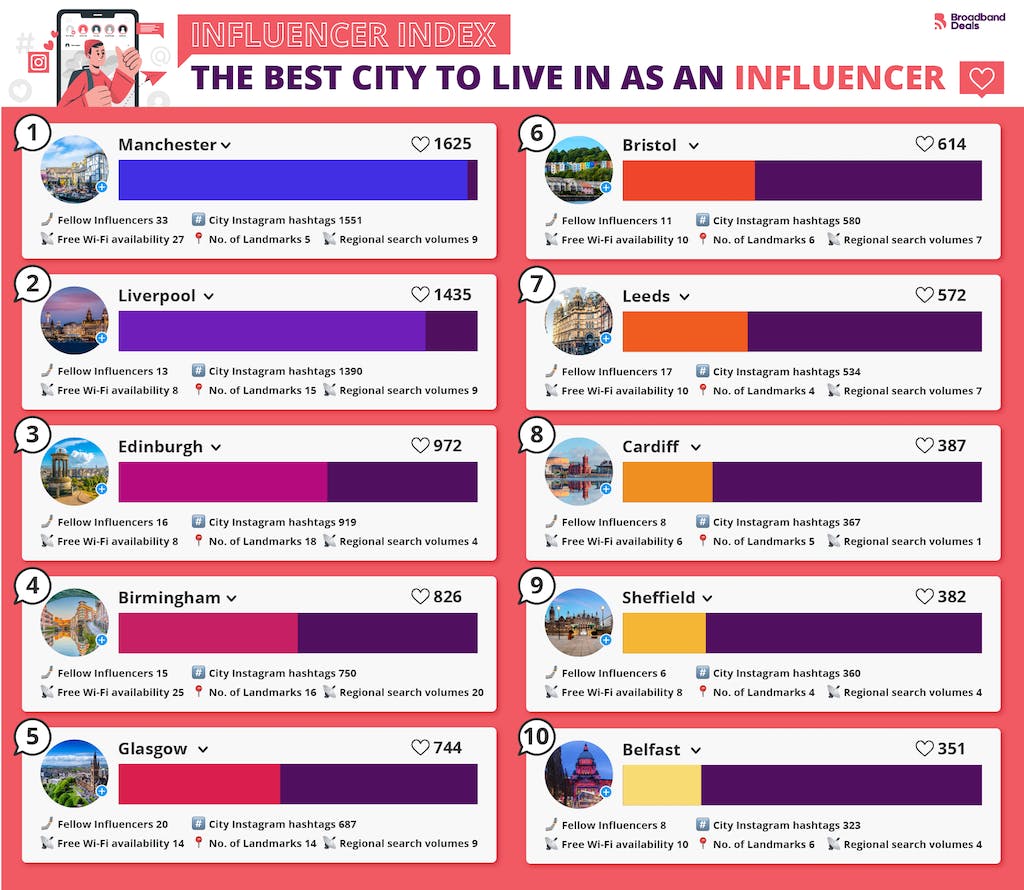 Manchester ranked as the best city in the UK to be an influencer with 1,625 points in total. A whopping 1,551 of those points were awarded for the city’s 15 million Instagram hashtags (one point awarded per 10,000 hashtags), emphasising how popular the city is. The north-western city also ranked highly for its free Wi-Fi hotspots and the number of influencers residing in the city.

With 1,435 points in total, Liverpool placed as the second best city to be an influencer in the UK. The city’s success was largely down to the number of hashtags for the city on Instagram, as 1,390 points were awarded for these alone. The city also boasted some of the most landmarks of all UK cities studied, according to TripAdvisor data, for which it was awarded 15 points.

Breakdown of each influencer factor in UK cities

The UK cities with the most free Wi-Fi hotspots 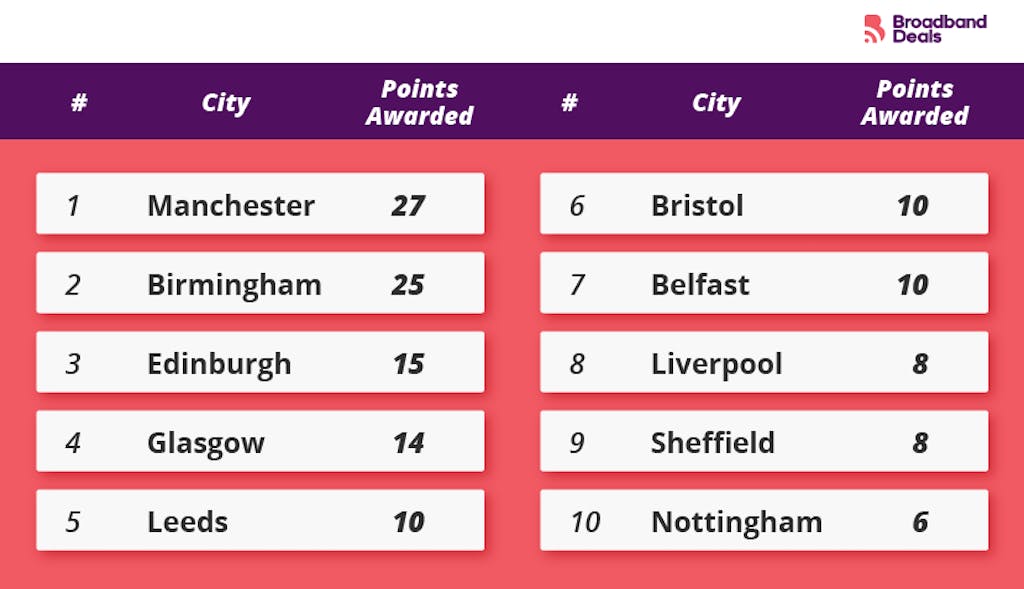 Free Wi-Fi hotspots enable influencers to take, edit and share content on the go in a cost-effective way, but which UK city has the most?

The city boasting the most free Wi-Fi hotspots was Manchester, as the city was awarded 27 points for its 1,388 hotspots throughout the city, based on our scoring system that awarded one point per 50 free Wi-Fi spots. This was more than double the number of hotspots in neighbouring city Leeds, who had just 533.

Birmingham was home to the second highest number of free Wi-Fi hotspots in the UK, after being awarded 25 points for its 1,294 hotspots. This meant that the city had 1,081 hotspots more than Coventry, their neighbours, who had just 213.

The UK cities with the most landmarks 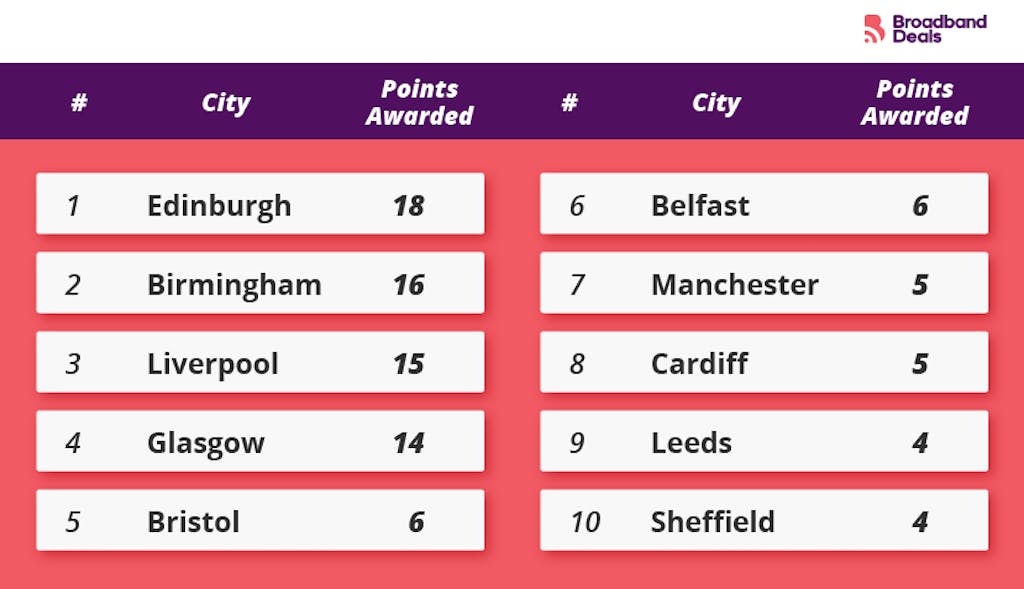 Another feature that makes a city perfect for influencers was the number of landmarks since these are perfect for scenic photo opportunities.

Our analysis of TripAdvisor data found that Edinburgh is home to the highest number of landmarks, with the city receiving 18 points for the 273 that can be found in the city, based on our scoring system assigning one point per 15 landmarks. Meanwhile, Birmingham’s 245 landmarks scored the city 16 points, making it home to the second most landmarks of all the UK cities studied.

Home to the iconic Beatles statue and the Albert Dock, Liverpool has the third most landmarks of all UK cities studied, with 229 landmarks and 15 points awarded as a result.

Representing Scotland once again, Glasgow is home to 224 landmarks, the fourth highest number, which landed the city 14 points.

The UK cities with the most city hashtags on Instagram 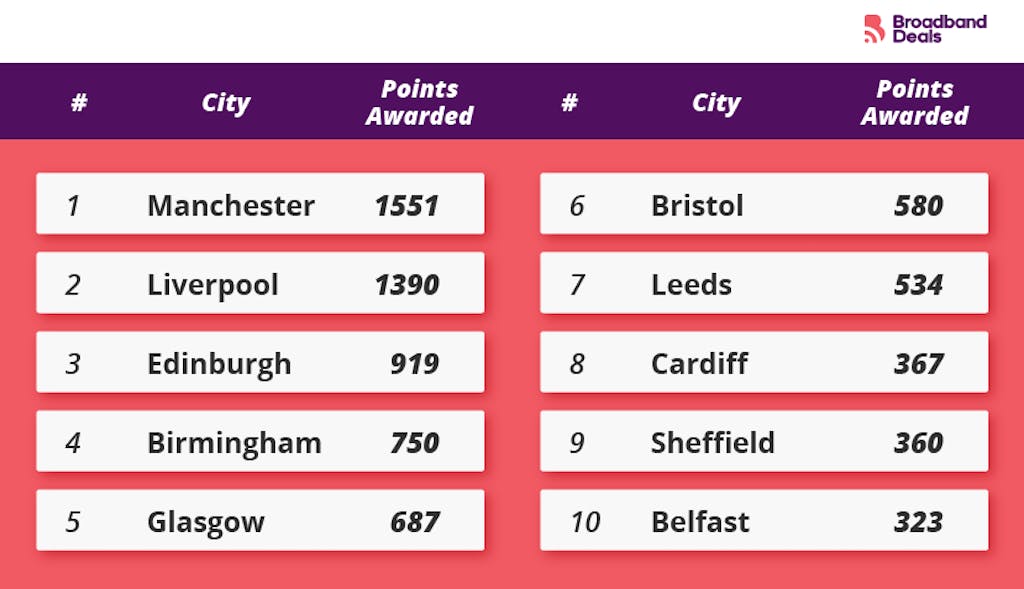 Demonstrating the city’s popularity on Instagram, we also studied which UK cities were most hashtagged on the popular photo-sharing app.

Manchester came out on top once again, with the city boasting 15,517,730 hashtag mentions on Instagram – the highest figure of all cities studied. In fact, neighbouring city Leeds had just over a third of this figure, with 5,346,835 hashtags in total. Manchester’s hashtags saw the city awarded an impressive 1,551 points in our index overall, based on our scoring system assigning one point per 10,000 hashtags.

Liverpool received the second highest number of hashtags (13,903,958), which equates to an impressive 1,390 points in our index.

The UK cities with the highest searches for ‘Instagram’ 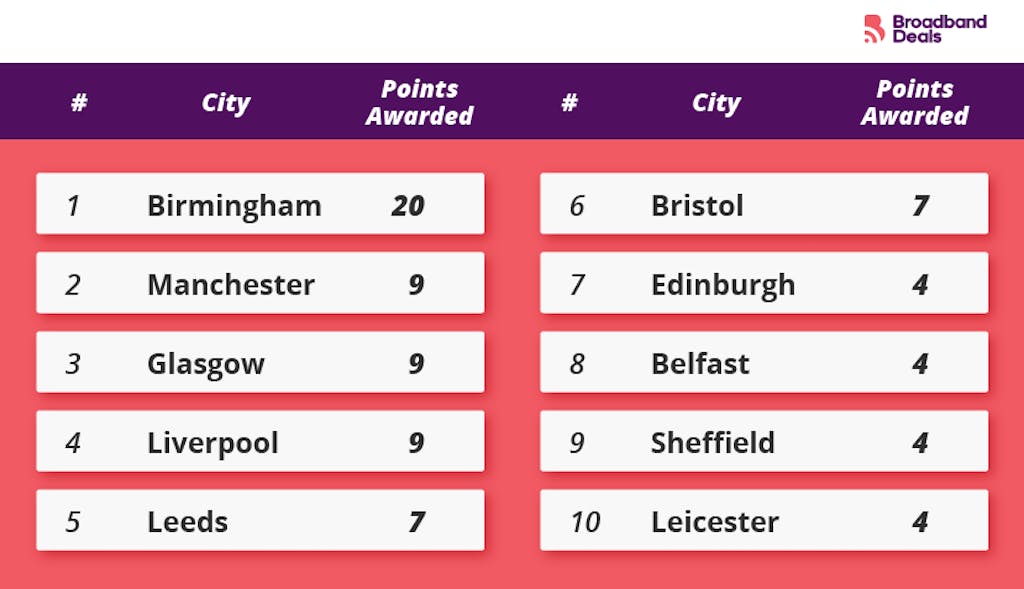 The UK city that made the most online searches for ‘Instagram’ was Birmingham. Brummies make approximately 201,000 searches each month, on average, on Google, resulting in the city being awarded 20 points, based on our scoring system assigning one point per 10,000 searches made.

Manchester, Glasgow, and Liverpool received nine points each for the number of monthly searches for ‘Instagram’, with our analysis finding that each city made 90,500 searches for the term each month, on average.

Leeds and Bristol had the third highest number of searches for ‘Instagram’ each month and were awarded seven points each as a result, with both cities made 74,000 searches for the term each month on average.

The UK cities with the most influencers 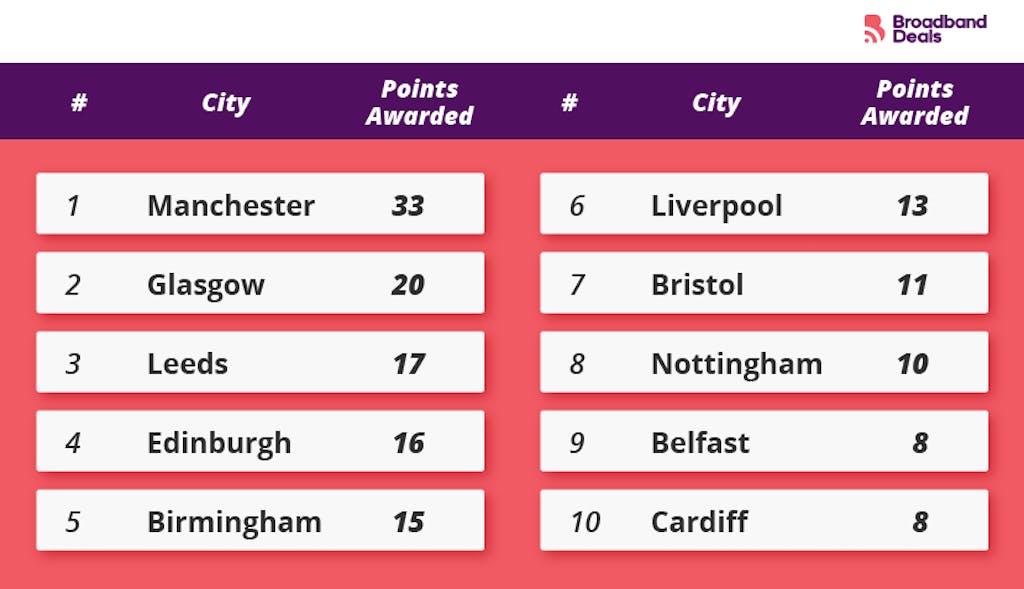 To find the number of influencers per city in the UK, we utilised data from influence.co. The platform defines an ‘influencer’ as someone who owns an account with 5,000 followers or more.

Our research found that Manchester has the largest influencer population of all (67). As a result, our index awarded Manchester an impressive 33 points, based on our scoring system assigning one point per two influencers.

Awarded just one point fewer was Edinburgh, as the city was home to 33 fellow influencers, suggesting that Scotland’s major cities are a popular spot for influencers in the UK.

The best capital cities to be an influencer in Europe

With the influencer population expanding throughout Europe, we extended our research to the entire continent, by identifying the best European capital cities to become an influencer.

Which capital cities are the best place to be an influencer in Europe? 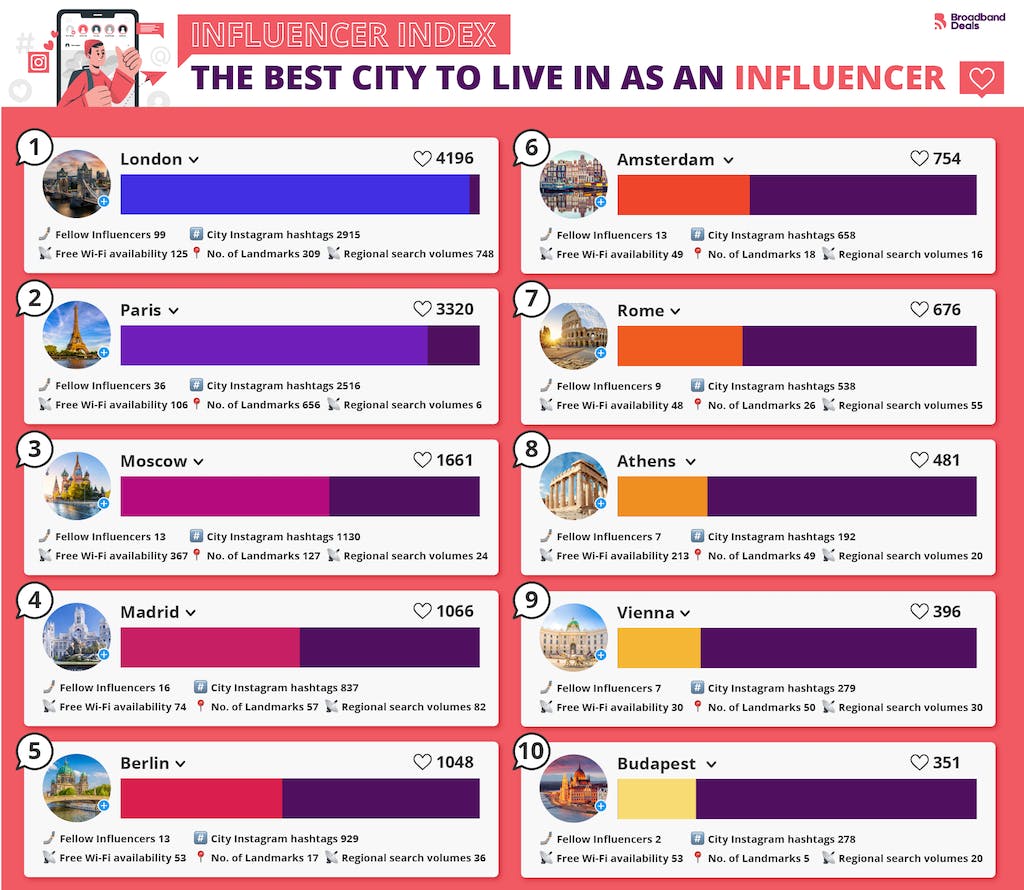 Our index-based study found London to be the best European capital city for influencers, as it was awarded 4,196 points overall. Of these points, 2,915 were awarded for the number of times the city was hashtagged on Instagram (145,773,390 times).

London was also awarded the most points for having the largest number of influencers in the city. With 998 influencers residing in the city, that’s three times more than our second-place, Paris! What’s more, the city was also awarded a further 748 points after our analysis found that 7,480,000 online searches for ‘Instagram’ are made on average each month. These factors combined meant that the UK capital ranked as the best to be an influencer, with a whopping 876 more points than Paris.

Our index found that Paris is the second best European capital city to be an influencer, with a total of 3,320 points. Not only did Paris have the second highest number of Instagram hashtags of the cities studied, with 125,815,888, but it also had the highest number of landmark hashtags, with #eiffeltower tagged on Instagram a staggering 6,556,198 times.

The best cities to be an influencer in Australia

Since Australia is also renowned for its large population of Instagram influencers, we also investigated which of Australia’s major cities are the best to be an influencer.

Which cities are the best place to be an influencer in Australia? 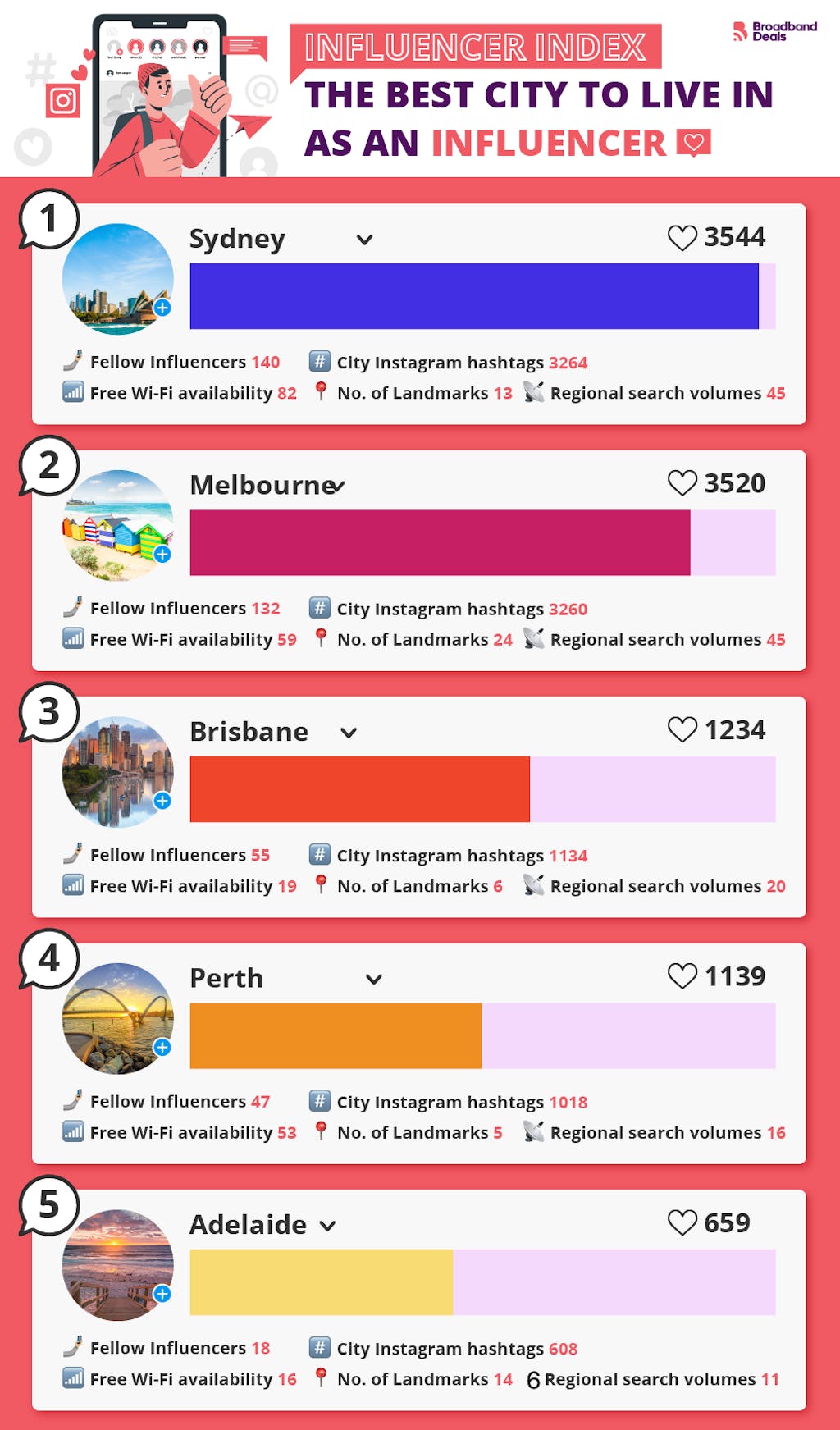 We discovered that the best Australian city to be an influencer is Sydney after the city was awarded a top score of 3,544 in our index. The city has a whopping the 32,646,800 hashtags, resulting In Sydney being awarded 3,264 points – the highest of all Australian cities. Sydney also had the largest number of influencers, with 280.

The third best city to be an influencer in Australia is Brisbane, with the city being home to 111 influencers, 952 free Wi-Fi hotspots, and 101 famous landmarks, all of which contributed to the city’s impressive overall index score of 1,234.