Relative newcomer Hyperoptic offers competitively priced broadband deals of up to a gigabit on its own full-fibre network. But does it have a package that’s right for you – and is it available in your area yet?

It’s fairly new, but Hyperoptic has built a great reputation already and bagged a clutch of awards for its fast broadband speeds and customer service. Prices are competitive, too. One big downside is that coverage is still limited – however it’s expanding quite quickly. If Hyperoptic covers your area, though, it’s worth a place on your shortlist.

We can’t find much not to like about Hyperoptic broadband – if only it covered more of the UK. It combines award-winning speeds and customer service with flexible deals at prices that rival its competitors’ but promise much faster broadband. So far, it only serves residential and business premises in around 40 UK towns and cities, although it has ambitious plans to extend its coverage to new locations. That means unless you’re already in the right postcode district to receive Hyperoptic broadband, it will have to remain one to watch until its service expands to your area. 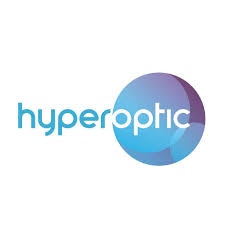 *Reviews on this page are randomly selected and sourced from an anonymous feedback survey of 7,681 broadband customers conducted by BroadbandDeals.com in July 2020.

Hyperoptic was set up in the UK in 2011 by award-winning internet entrepreneurs and business partners Boris Ivanovic and Dana Tobak. It works with developers and property managers to offer full fibre broadband to residential and business premises at some of the fastest speeds available in the UK. Despite winning multiple awards for its innovation, service and speed, most people won’t have heard of Hyperoptic yet. This is probably because its service is still limited – it started in London and was available to around 400,000 homes and businesses in 40 towns and cities at the most recent count, although it has ambitious plans to expand further.

Switching to Hyperoptic broadband is pretty straightforward. You’ll need to give notice to your current provider, but you don’t have to sync the end of your old service with your new Hyperoptic connection as this will be on a totally separate network. You can book your Hyperoptic broadband installation online and they’re available six days a week, and it could even be next-day if slots are free. Installation takes around an hour – make sure you get permission from your landlord if you’re renting as the engineer will need to drill a small hole to run the cable inside then mount a small socket or fibre connector on the wall.

You’ll get a free Hyperhub router and, usually, the engineer who comes to install your Hyperoptic broadband connection will bring the router and install it as part of the service. Hyperoptic will let you use another router of your choice, if you wish. This must have an ethernet connection and be capable of supporting fibre broadband. However, technical support may be limited if you choose to use your own router. Hyperoptic’s phone service will only work with its Hyperhub router, so if you’re bundling in phone calls and want to use your own router you’ll need to plug it in alongside the Hyperhub.

Should I choose Hyperoptic?

Is a Hyperoptic broadband package the right choice for you? We’ve pulled together an overview of what Hyperoptic offers to help you make an informed decision.

Hyperoptic is among just a small number of broadband providers in the UK that offer full fibre broadband. The majority of fibre broadband services in the UK are fibre-to-the-cabinet (FTTC). With these, the service comes to a cabinet or box in your street through fibre-optic cable and is then delivered into your home via the copper wire of your phone line.

Hyperoptic’s fibre optic cable, on the other hand, comes right into your home. This is known as fibre-to-the-premises (FTTP) or fibre to the home (FTTH). With a FTTP connection like Hyperoptic’s, you can get much higher speeds than with FTTC, which is the service that you’ll get from the majority of broadband providers including BT and Sky, who use the UK Openreach network.

Hyperoptic’s packages can give you up to 1Gbps for both download and upload speeds. These speeds are around 15 times faster than you’ll get with a typical FTTC connection from a provider on the Openreach network, which goes up to around 67Mbps, and about twice as fast as the fastest widely available package offered by Virgin Media.

All Hyperoptic broadband packages come with unlimited downloads, free installation and a free Hyperhub router. You’ll pay a one-off setup fee of £29. Hyperoptic doesn’t use traffic management like some providers, which could slow down your internet at peak times for some tasks.

These are the broadband packages currently available from Hyperoptic:

Hyperoptic fast broadband averages speeds of 50Mbps. That’s the slowest speed Hyperoptic offers, and the package is its cheapest. Although it’s Hyperoptic’s slowest package, 50Mbps is still well above the average broadband speed offered by the majority of providers on the Openreach network. It will suit larger homes who use several different devices.

Superfast is Hyperoptic’s most popular broadband package. It averages speeds of 150Mbps which is more than enough for most larger households with lots of devices to connect to the internet.

Hyperoptic ultrafast broadband averages speeds of 500Mbps. That makes it one of the fastest broadband speeds currently available in the UK. Ultrafast would suit bigger households who want to enjoy everything the internet offers without any buffering, for example multiple heavy users regularly streaming 4K content.

Hyperfast is Hyperoptic’s fastest broadband package, averaging a lightning speed of 1Gbps. This is far more than any household but the heaviest internet users would need, and would future-proof your home with a good speed margin.

You should be aware, though, that you’ll need a wired ethernet connection to enjoy the full 1Gbps – Wi-Fi technology can’t transmit data that fast just yet.

If you're unsure what broadband speed would be right for your household or business, our guide to choosing broadband will help. If you’re confused about what Mbps and Gbps mean, take a look at our guide to bits and bytes for more information.

Check our Hyperoptic provider page to find out whether Hyperoptic broadband packages are available in your area.

Can I get Hyperoptic broadband for my business?

Hyperoptic also offers broadband packages ranging from 50Mbps to 1Gbps to businesses in the postcode areas it covers. You’ll get a 24-hour service level agreement (SLA) and one static IP address with all its packages, which come as rolling monthly deals with 30 days’ notice required if you want to quit.

Do I get a landline with Hyperoptic broadband?

You don’t need a landline to receive Hyperoptic broadband, as it comes via its own full-fibre connection. However, you can add calls to your Hyperoptic package if you want to. These are delivered via a voice-over-internet-protocol (VOIP) phone service and as long as your Hyperoptic Hyperhub router is connected, you’ll be able to make and receive phone calls in exactly the same way as you would from a landline phone.

Hyperoptic’s phone service includes free evening and weekend calls, and you can choose to bundle in extra anytime or international calls for a small additional charge.

Can I get TV with Hyperoptic broadband?

Hyperoptic doesn’t offer TV packages, so you’ll need to source your small screen entertainment elsewhere. However, Hyperoptic’s broadband speeds will give you plenty of capacity to enjoy subscription and pay-per-view channels, as well as downloading movies.

Hyperoptic takes its customer service seriously and has a clutch of awards to prove it, such as Best Customer Service in the Internet Service Providers' Association (ISPA UK) awards 2019. It has a five-star rating on Trustpilot, but as it’s such a small provider it doesn’t feature in the industry regulator Ofcom’s customer satisfaction report.

If you need to get in touch with the Hyperoptic customer service team it’s available 24/7 by phone or live chat. You can also contact the team by email. Its website also has answers to lots of frequently asked questions and plenty of other information such as downloadable router guides, so you may be able to fix your issue or answer your query yourself without needing to contact anyone.